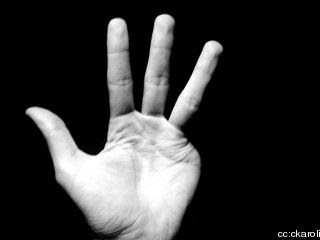 Worst case scenario mum.
I'm not sure where I developed this trait. It probably comes from my realist and cynical views of life in general. It started when child number one was young and manifests its self every so often so that my thoughtless children are fearfully brought back into submission.
Like when my kids are dangerously close to falling over the rails...out it comes. "Don't do that...you fall 0n your head and die" Or like "don't jump on the trampoline with your apple...You'll choke and die". Or "don't go by the road...you'll get hit by a car and die".

I didn't really discover what a strange parent I had become until a friend had told me what my 5 year old son had recounted to her. He had an infected pinky finger. It was red and painful and he really didn't want me touching it. I was trying to convince him that I needed to put some antiseptic ointment on that little finger and a plaster to cover it. NOOOO, NOOOO, NOOOO! And out came worst case scenario mum. "Look, if you don't give me that finger, the infection will spread to the bone. I will then have to take you to the doctor who will then have to chop it off....and you will have to wave like this" I motion to him a four fingered wave. The look of horror comes over his face. "Here mummy..." Oh yeah...Worst case scenario mummy strikes again.
A week later he's telling my friend..."look at my finger... its all better now. Its a good thing otherwise I would have to wave like this...". She laughs.

I'm not sure what I will do when the kids are teenagers and they want to live on the edge, as you do. My hope is that I will have ingrained it so much into them, it will go something like this....
" Honey be careful when you are driving..."
" I know, I know...don't speed or I'll crash and die, got it".
Thats right...
Posted by jacksta at 11:08 AM

haha! Will have to ask for a demo of the wave sometime!

Ha! Brilliant. You are a realist mum. Actually I do the same. No point sugar coating it aye? You make me laugh!

Bahaha that is so funny! Truth hurts (literally!) I try not to say something like that unless it's really true! ;-)

That was such a funny read! Classic, your kids are gonna be very ready for anything that comes their way! xx

My blog a nut shell

Family, Food, Faith, Friendship, and the Funnier side of life